A touring North American production of “Fiddler on the Roof” is playing at Chicago’s Cadillac Palace Theater through May 22. (Credit: Joan Marcus)

The current touring production of “Fiddler on the Roof,” which has been booked for a surprisingly short run of just a week at Chicago’s Cadillac Palace Theater, couldn’t be more timely.

And it’s an ideal example of how “a classic” – in this case both Yiddish writer Sholem Aleichem’s stories from 1894, and the ever-remarkable 1964 musical they inspired, with a score by Jerry Bock and Sheldon Harnick, and a book by Joseph Stein — may have a whole new resonance right now.

In fact, as the curtain call for Tuesday’s opening night performance drew to a close, Yehezkel Lazarov, the Israeli actor playing Tevya (the milkman with five daughters who makes a living at Anatevka, a shtetl in the settlement area, and who periodically speaks to God with a sardonic winning streak) addressed the audience and offered a note of solidarity for the millions forced into exile by the war now raging in the very region around Ukraine where the musical is set.

Of course, the details are different. In 1905, it was the Russian Tsar who allowed the Jews to live in the area for a while, but then announced that they had to leave their homes immediately and sent them into exile. Yet the dynamics of this upheaval are not so different.

As anyone who knows “Fiddler” knows, the word (and song) that has driven this story from the very beginning is “tradition.” But it’s the unstoppable companion concept of “change” that begins to dominate, with all the deep pain (as well as a certain freedom) that can come with it.

At the center of “Fiddler” is Tevye, a poor, hard-working man in a macho society who has been married for years to his petulant but devoted wife, Golda (Maite Uzal), and is the father of five daughters, several of whom are now of marriageable age. And if he considers that it is his duty to choose (or at the very least to approve) the men who will marry his daughters, it is this affair which will deeply challenge him and definitively upset his life.

Tzeitel (Kelly Gabrielle Murphy) is the eldest daughter, and though she’s in love with Motel (ideally played by Daniel Kushner), Tevye tries to exercise her paternal “rights” by stopping her from marrying this shy, no-nonsense tailor. the penny. He makes a deal with Lazar Wolf (the fiery Andrew Hendrick), the town’s much older, widowed, well-to-do butcher. But in this case, love trumps all, Tzeitel rebels in her own special way, and her devotion to Motel – and her awakening – is about to signal even more changes to come.

Hodel (the second eldest daughter, successfully played by Ruthy Froch), emerges as the surprisingly independent and romantic girl who falls in love with Perchik (expertly played by Solomon Reynolds), a university student and radical political activist from kyiv who senses that a revolution is in the air. The two become powerfully attracted to each other, but when Perchik returns to kyiv, he is arrested, imprisoned, and sent to Siberia. And despite all of Tevye’s fears, Hodel finally boards a train and follows the man she loves.

And then there’s Chava (in a winning trick by Noa Luz Barenblat), the cautious bookworm who does the most unthinkable thing by falling in love with fellow book lover Fyedka (a fine performance by Jack O’Brien ), a nice young man who loves books. Tevye is so outraged by their marriage, and so stripped of his paternal power, that he disowns Chava. As a result, the family and the notion of “tradition” are both fractured. 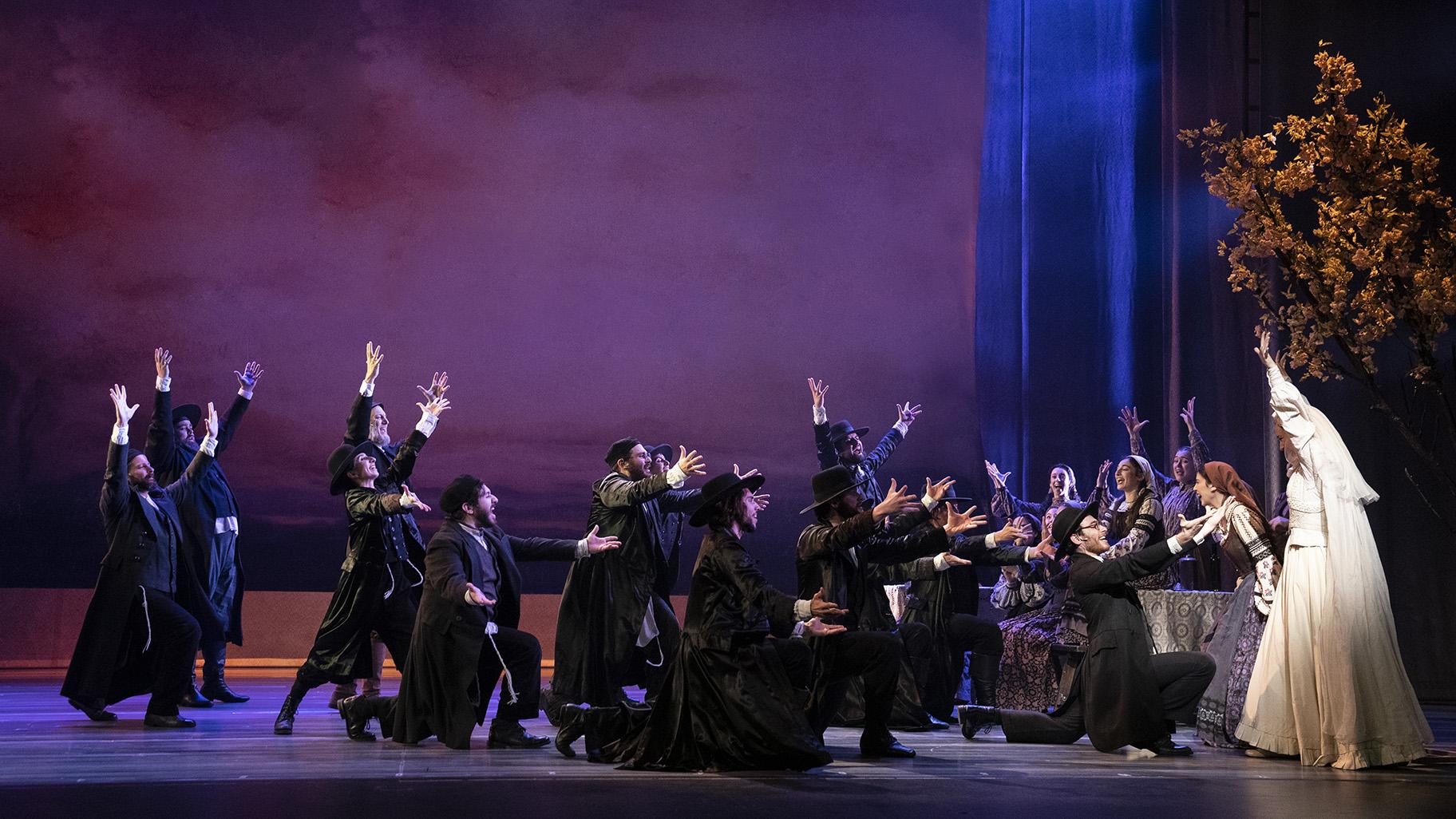 A touring North American production of “Fiddler on the Roof” is playing at Chicago’s Cadillac Palace Theater through May 22. (Credit: Joan Marcus)

But that’s only part of the upheaval in this story, as Tzeitel and Motel’s wedding celebration (filled with male dancers performing the iconic bottle-in-the-hat dance) is turned upside down when local Russian thugs ransack the place. And in this case, it is only a prelude to what will follow, because shortly after, the tsar decrees that all Jews must evacuate the country.

What follows is a great exodus and diaspora, with Tevye, Golda and their two youngest daughters heading to America; Hodel and Perchik already live in Siberia; Tzeitel and Motel, and Chava and Fyedka, towards Poland; and Yente, the irrepressible matchmaker (successfully played by the petite but mighty Brooke Wetterhahn) headed for Jerusalem. As for the Fiddler (the subtle but winning Ali Arian Molaei), he will undoubtedly continue to float among them, much like a figure in a painting by Marc Chagall.

Directed by Bartlett Sher and choreographed by Hofesh Schecter (in much of Jerome Robbins’ original lore), the production is ideally engineered by Michael Yeargan (again, with a hint of Chagall born in the air), with lighting by Donald Holder and costumes by Catherine Zuber. .

The 10-piece orchestra, conducted by Jonathan Marro, is top-notch. Although, given the magic of this show’s score and powerful story, it really should be bigger.

One note, one problem with this production – and this has been a weakness in a number of recent shows – is that the dialogue has at times become muffled or even inaudible. Better sound controls are a must.

“Fiddler on the Roof” runs through May 22 at the Cadillac Palace Theater, 151 W. Randolph. For tickets, visit broadwayinchicago.com.